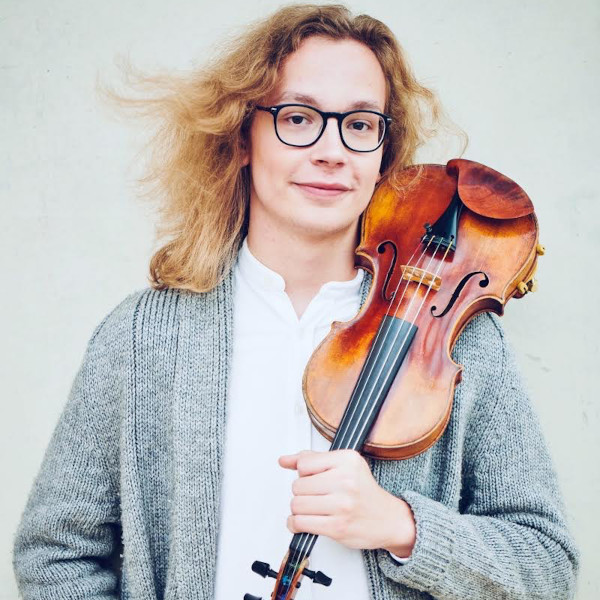 Born in 2000, Tim de Vries studied with Ilya Grubert at the Amsterdam Conservatory, then with Boris Kuschnir at the Music and Arts University of Vienna. He is currently studying with Christian Altenburger at the Vienna University for Music and Performing Arts. He was the winner of all major Dutch competitions and won international awards at the Perpetuum Mobile Competition. He has participated in numerous masterclasses with Christian Tetzlaff, Simone Lamsma, Henja Semmler, Dmitri Ferschtman, Pavel Vernikov, Liviu Prunaru, Lu Siqing, Jennifer Stumm, Marc Danel, Denis Brott and Malcolm Singer. Since his debut at the age of eleven, De Vries has performed as a soloist and chamber musician throughout Europe. Concerts have taken him to the United States, Canada, the Netherlands, Germany, Belgium, France, Italy, Switzerland, Austria, the United Kingdom and Greece, performing in venues such as the Het Concertgebouw Amsterdam and the Walt Disney Concert Hall in Los Angeles.
He is a passionate chamber musician. He has worked with artists such as Nobuko Imai, Mihaela Martin, Frans Helmerson and members of the Royal Concertgebouw Orchestra. He is also co-founder of the Diotima piano trio.
In 2012 NTR made a documentary about him, which premiered at the Dutch Film Festival.
He plays a 1793 Lorenzo Storioni violin generously loaned to him by an anonymous sponsor.