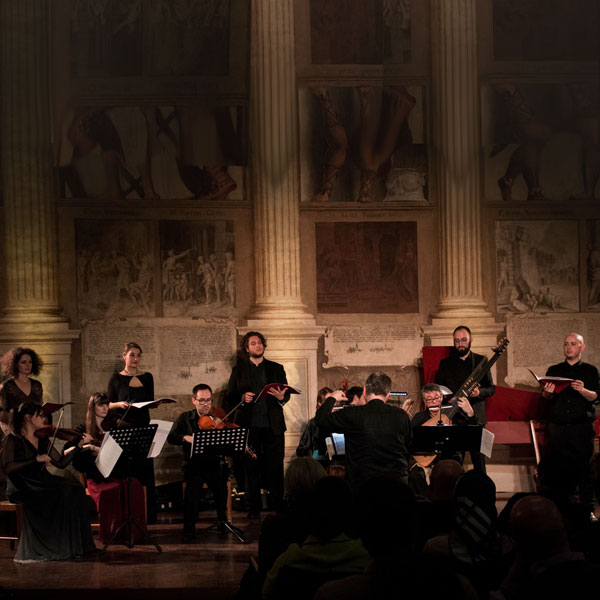 Made up of young and established Italian musicians, RossoPorpora is dedicated to the Renaissance and Baroque repertoire.
The ensemble participates in important festivals both in Italy and abroad, including Laus Polyphonie – Antwerp, Belgium, and Oude Muziek – Utrecht, Holland.
It has recorded the cycle of cantatas Membra Jesu nostra by D. Buxtehude, in a recording defined as paradigmatic by the Italian critics, the Madrigali & Symfonie, Op.2 by Biagio Marini, awarded with the Disc of the Month by the Amadeus magazine.
In December 2017 the RossoPorpora Orchestra was born. It made its debut in the Season of the Vicenza Quartet Society with a program dedicated to Claudio Monteverdi’s concerted madrigals.
In 2018, the album L’amoroso & crudo stile, a collection of madrigals by Luca Marenzio, was released. Awarded with the Five Stars by the magazines Amadeus and Musica, it was reported as the Disc of the Month by the Classic’s Voice magazine, received the 5 Diapasons from the French magazine of the same name and was awarded the German-language Music Critics Award as the best vocal record of the year.
With the support of the Camillo Caetani Foundation in Rome, RossoPorpora conceived and gave life to Italia mia – Storia del madrigale italiano , a three-year cycle of courses, concerts and conferences, aimed at studying, deepening and spreading the knowledge of the madrigal.