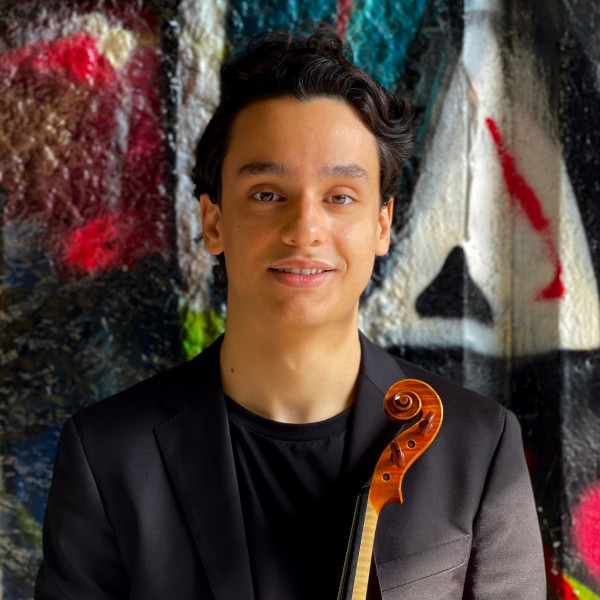 Born in 1999, Riccardo Lui graduated with 10, honors and honorable mention at the “L. Campiani ”of Mantua, under the guidance of Fabiana Fabiano and received the“ Sergio Mafizzoni ”scholarship as the best graduate student.
From 2015 he continued his studies with Zakhar Bron in Switzerland, and with Maurizio Sciarretta at the renowned “Imola International Music Academy”.
Recently, he appeared at the “Ravenna Fesival”, performing Tchaikovsky’s sextet “Souvenir de Florence” for Maestro Riccardo Muti.
He has won several competitions (violin and chamber music) and in 2017 he received the first prize at the “Golden Classical Music Awards”, a success that led him to make his debut at Carnagie Hall in New York.
He has received advice and encouragement from musicians such as Dalibor Karvay, Christian Altenburger, Kyoko Takezawa, Tommaso Louison, Osvaldo Scilla, Felice Cusano, Alberto Miodini, David Mirzoev, Gerald Schubert and Albena Danilova.
He had the privilege of making music together with artists such as Riccardo Muti, Valery Gergiev, Maurizio Pollini, Jean-Efflam Bavouzet, Leonidas Kavakos, Vadim Repin and Steward Coplan, in rooms such as the “Megaron Athens Concert Hall”, “Maggio Musicale Fiorentino” and others.
He plays a violin built by Lorenzo Storioni in Cremona in 1778.
The loan is part of the “Adopt a musician” project, conceived by Music Masterpieces SA, Lugano.