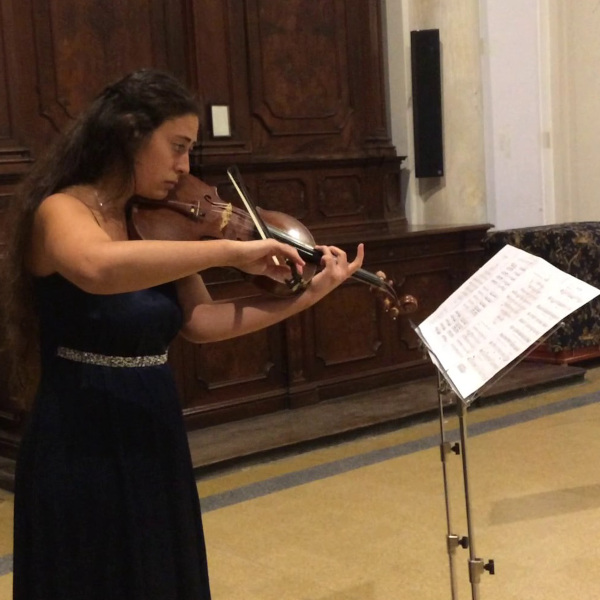 Giulia Arnaboldi studied with Marco Toscani and Leonardo Bartali. She attended masterclasses held by violists such as Danilo Rossi, Antonello Farulli, Simone Briatore. She is currently studying in Cesena with the internationally renowned violist Danusha Waskiewicz.
In the chamber field she had the opportunity to play with artists such as Ivan Rabaglia, Yves Savary, Kolja Lessing, Susanne Scholz. She has performed at important festivals such as the Bologna Festival and “Traiettorie” in Parma. With the Latvian harpist Darta Tisenkopfa she obtained the first prize in the chamber music section at the XXVII “Riviera della Versilia Daniele Ridolfi” Competition in Camaiore and the third prize in the International Competition “Suoni d’Arpa” 2018. They also proposed their repertoire during a tour in Latvia.
With the GMC (contemporary music group directed by Danilo Grassi) she performed Folksongs and Naturale for viola, percussion and recorded voices by Luciano Berio at the Magnani Rocca Foundation in Traversetolo (PR).
In the summer of 2021 she premiered DEDICATVM for itinerant viola dedicated to her by the composer David Cavatorta, at the Chiostro Maggiore of the Parma Conservatory.
She has played with various orchestras including Philharmonic of the Municipal Theater of Bologna, Symphony Orchestra of Milan “Giuseppe Verdi”, Orchestra of Padua and Veneto, Symphonic Orchestra of the Alps, Arturo Toscanini Philharmonic, Youth Orchestra “Luigi Cherubini”, Italian Youth Orchestra.