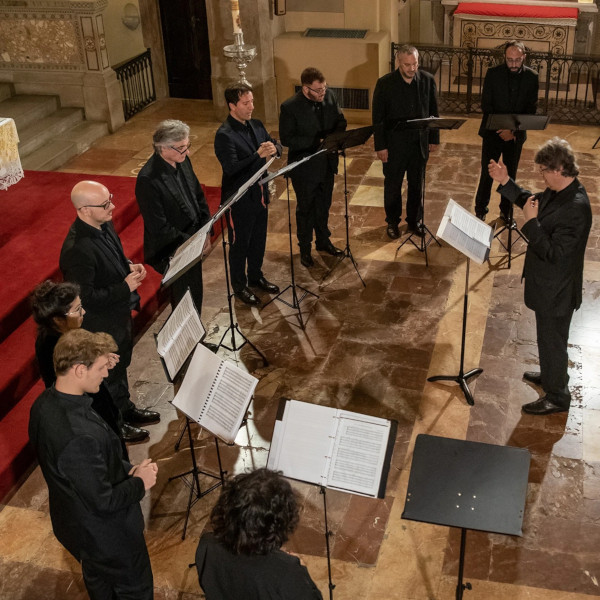 Founded in 2001, De Labyrintho sings the sacred polyphony of the Renaissance. Dufay, Obrecht, Lasso, Palestrina, Victoria, Gesualdo are some of the authors on whom the attention of the group has been most concentrated, however, Josquin Desprez stands out above all, the great Renaissance master, whom De Labyrintho has elected as tutelary deity since his training.
Unanimous approval received the group’s record activity (four discs awarded as Disc of the Month by Amadeus magazine, “Disc of the month” awards in English, German, Portuguese, Spanish and US magazines, 5 Stars Classics Voice, 5 Stars Music, 10 Cd Classic, three times awarded with the 5 Diapason by the French magazine of the same name). Among them stand out the Amadeus 2008 Award for the best album of the year for the recording of the Prophetiæ Sibyllarum of Orlando di Lasso, the mention to the prestigious Klaraprijzen of the Belgian state radio in 2007 and the Gramophone Critic’s Choice in 2004.
De Labyrintho was also included, the only vocal group, in the disc that collects the best of sixty editions of Music and Poetry in San Maurizio, the most prestigious Italian festival of Ancient Music, alongside musicians such as Gustav Leonhardt, Frans Brüggen and Jordi Savall .